Linguistics has become an empirical science again, after several decades when it was preoccupied with speakers’ hazy “intuitions” about language structure.

With a mixture of English-language case studies and more theoretical analyses, Empirical Linguistics gives an overview of some of the new findings and insights about the nature of language which are emerging from investigations of real-life speech and writing — often, though not always, using computers and electronic language samples (“corpora”). 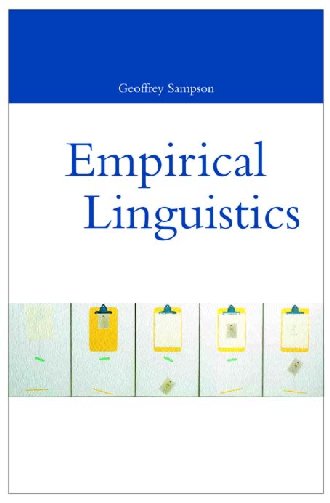 Empirical Linguistics brings concrete evidence to bear in resolving long-standing questions such as “Is there one English language or many Englishes?”, and “Do different social groups use characteristically elaborated or restricted language codes?”.

The book shows readers how to use some of the new techniques for themselves. One of its chapters gives a step-by-step “recipe book” method for applying a quantitative technique that was invented by Alan Turing in the World War II codebreaking effort at Bletchley Park, and has been rediscovered and widely applied in linguistics fifty years later.

Empirical Linguistics asks why the discipline lost its way in the closing 20th-century decades. It shows how the reliance on “speaker intuitions” resulted from misunderstandings about the nature of science, reinforced by accidents of publication history.

Finally, the book discusses the distinction between aspects of human language which can, and those which cannot, be investigated scientifically. Describing the meanings of words is a different kind of enterprise from grammatical analysis. Taking the empirical scientific method seriously means that we must be serious about its limitations also.

ought to be required reading for all students and practitioners of linguistics
— Shravan Vasishth, in Journal of Linguistics
Part nuts-and-bolts computational linguistics articles and part cri de coeur from a researcher who is exasperated at the hand-wavy route much theoretical linguistics has taken.
— “Bill”, on Goodreads
provides some fascinating data and provocative philosophical argumentation
— Steven Abney, in Computational Linguistics
[contains] one of the best examples I have seen of the application of corpus linguistics to a central idea in generative theory
— William A. Kretzschmar, Jr., in Journal of English Linguistics
The demands this book makes for a switch from “intuitive” data to objective, observational data in confirming or disconfirming linguistic theories is absolutely to the point. There are descriptions of several good examples of hypotheses supported with intuitive evidence that are disconfirmed by empirical evidence …
— “Nat”, on Goodreads