An End to Allegiance:
individual freedom and the new politics

A survey of the diverse strands of the modern political movement variously known as liberalism, libertarianism, or the New Right.

I wrote this book at a time when socialist thinking still dominated politics and “respectable” public opinion, in Britain and overseas. Nowadays, many points of view discussed in this book are taken for granted, and different political issues have come to the fore. But the widespread acceptance nowadays of free-market principles has only come about because, during the 1970s and 1980s, a number of us doggedly argued against the socialist consensus.

The book has not lost its relevance: plenty of strands of libertarian thinking are no more accepted now (some are even less accepted) than they were when it was written. 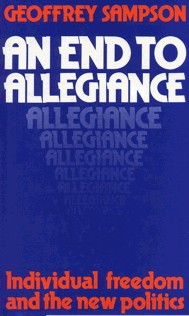 an extremely lucid summary of the contemporary debate on freedom, with much practical illustration ... This is popularising at its best ... a “front line” book of no mean significance
— Economic Affairs
an admirable plain man’s guide to the New Right ... [Sampson]’s enthusiasm is intellectually seductive
— Times Literary Supplement
[in a survey of books on the libertarian movement]: This is the best of the lot. … [Sampson’s] book is a thoughtful explanation and critique of libertarian ideas, illuminated by a good many of his own insights.
— David Friedman, in the 1989 edition of his book The Machinery of Freedom: guide to a radical capitalism
… for a “libertarian” (in the American sense), Sampson offers a more coherent viewpoint than most. Not that I agree with him, but he is a very good writer and I found this book a worthwhile read, if only for the fact that it offers quite a different perspective on libertarian thinking.
— from an anonymous Google Books review
Justice cannot be given to the importance of this book in the space available
— New Humanity Journal

Published in 1984 by Temple Smith in Britain and Universe Books in the USA. New or used copies available via relevant British or American