Language Complexity as an Evolving Variable

For much of the twentieth century it was an axiom of linguistics that “all human languages are equally complex”. Early in the century this idea emerged as part of a reaction against the popular assumption that unwritten third-world languages were crude communication systems, not comparable in subtlety with the languages of high European cultures – linguists argued, correctly, that the languages even of primitive societies often exhibited remarkable structural sophistication. And from the 1960s on, the same idea was reinforced by the then-new “generative” school of linguists, whose best-known representatives are Noam Chomsky and Steven Pinker. The generativists believed that language structure is largely determined by our genes and common to all mankind, rather than being developed through cultural evolution, so that there was little room for significant complexity differences between languages, or for changes in language complexity through history.

About the turn of the millennium, linguists across the globe began to challenge and reject this axiom, from many points of view and using many different kinds of observational evidence – often, evidence that was scarcely accessible for the earlier scholars who adopted the equality axiom. The new wave of linguists tend to see languages not as a function of human biology, but as institutions developed as part of a society’s cultural heritage – and hence as differing and evolving in their levels of complexity, just as other cultural institutions do.

A meeting in April 2007 at the Max Planck Institute of Evolutionary Anthropology in Leipzig assembled almost all the leading figures in this new trend of opinion, to thrash out what they agree on and where they differ. This book represents the outcome of that meeting. Nineteen researchers from twelve countries present their individual takes on the idea that human languages vary in complexity, and respond to the views expressed by fellow-participants at the meeting. 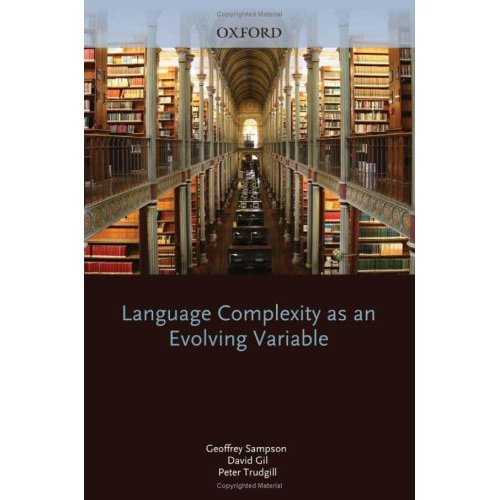 this book … probably is pushing at an open door … This in no way means that the book is uninteresting or unimportant. On the contrary, it raises a series of intriguing questions, discussed by eminent linguists, who have … important data to offer.
— Jan Terje Faarlund, Language
Excellent and comprehensive
— Tom Jackson, on Goodreads
interesting, well researched and engagingly written
— Christina Behme, International Cognitive Linguistics Association book reviews
The volume is interesting and provocative, and the papers suggest many avenues for follow-up reading.
— Jeffrey Heath (University of Michigan), in Anthropological Linguistics
This edited volume can … serve as a first introduction to the issue of language complexity, but also as an update for those who are more familiar with the research … the variety of ways in which linguistic complexity is investigated makes the case against equal complexity across languages much more compelling than any of the individual work would by itself.
— Connie de Vos, Linguist List reviews