Linguists led by Noam Chomsky have argued that grammatical properties shared by all human languages show that the detailed structure of language is not learned by children from their experience, but rather is inherited genetically – just as the detailed anatomy of the human body is determined by our genes. Obviously, this idea flies in the face of ordinary common sense, but that is not adequate grounds to dismiss it: true scientific theories sometimes are quite counter-intuitive. Theoretical linguists claim that they have found weighty evidence in favour of innate language structure.

They are wrong. The specific grammatical universals to which Chomskyan linguists appeal are not evidence for genetic determination of cognitive structure at all. To the contrary, these particular properties are hallmarks of structure that each child has to build up step by step for himself from the experience of hearing his elders speaking.

What is more, modern theoretical linguists are embarrassingly naive about the meaning side of language. The reason we use language is to communicate meaning, and philosophers of language and mind have developed a sophisticated understanding of how meaning works in ordinary language, over decades and even centuries before there was such an academic subject as linguistics. That understanding is incompatible with modern theories of “linguistic semantics”. But, rather than argue that the philosophers were all wrong, recent theoretical linguists have in the main simply ignored their philosophical predecessors. In the few cases where theoretical linguists do show awareness of relevant philosophical discourse, the linguists’ arguments against the established views are manifestly inadequate.

Linguists are just mistaken when they claim that their subject gives us reasons to adopt a novel view of human cognition. 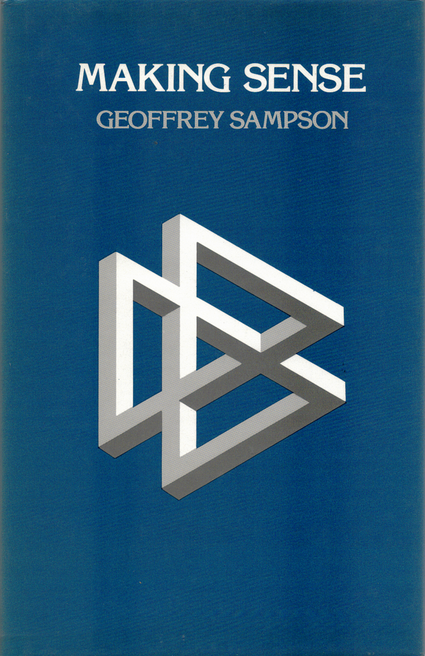 [Sampson] brings out more clearly than almost any other linguist some of the fundamental metaphysical issues behind linguistic theorizing.
— Language
an entertainingly detailed account of the reasons for holding that natural languages are not semantically determinate
— Language and Communication
Sampson is good at point out the weaknesses that make all existing theories of semantics (and not just Chomsky’s) rather shaky
— Choice
Making Sense is a delightful and important book. Its clarity, insight and appeal are immediately obvious and its long-term effects are bound to be far-reaching … It has been a rare pleasure and privilege to read Sampson.
— The Times Higher